Faerie Symphony And Other Stories is a compilation of Faerie Symphony (1977) and selected tracks from other Newman albums. Newman got his start with a band called The Playboys, playing skiffle (how the Beatles got their start as the Quarrymen), then moved on to a band called the Tomcats (after having been called The Thoughts) who then became the psychedelic band July. It was after the breakup of July that Newman's association with Mike Oldfield began, having produced Oldfield Tubular Bells, the first release of Richard Branson's then new label Virgin. The Oldfield connection is important, as Oldfield is one of many guests here.

Far from being psychedelic, Newman's first solo album Faerie Symphony album is a lovely Celtic-themed instrumental suite, the tracks flowing from one to the other. The overall feeling is very pastoral, as the title might imply – and the arrangements do bring forth the sense of a cool and lush green forest, alive with something, even only if seen fleetingly. As a result, flutes of various types are very prominent in the mix – guest John Field plays flutes, and flageolets, as does Newman play a flageolet (a recorder like instrument). While most of the pieces are light and airy, "The Fluter" is darker, pounding percussion becoming dominant, the voices of faeries heard… perhaps as they gather about this fluter. Brass, including trombones (Pete Gibson), adds some warmer tones to the mix here leading into "The Seelie Court." The latter part of this piece, with its happily trilling flute and somewhat martial percussion reminds me a bit of "Nude's Return" on Camel's Nude, but the percussion will also make you think of a marching band… and as this goes from quite, slowly getting louder, you can almost imagine this army, or band, are getting closer. What sounds like gunshot shatters the idyllic parade ("The Spell Breaks") and things fall eerie silent (the sound is at its most subtle here).

Danger seemingly gone, faeries start returning to the glen, hesitantly. There is a bit of melancholy in the violins, which hang on to their sweet notes, squeezing every last bit of drama from them. One imagines that surviving faeries are recovering the bodies of dead faeries. And yet, a trilling flute signals that hope is not all lost. Bells chime here, as well, signaling both and end and a beginning.

This chapter over, the next chapter begins with "The Fairy Song" – flutes, and humming voices, leading into "Dance of Daoine Sidhe" (pronounced Theena Shee). Fluttery sounds shreek overhead, while a drum roll leads us into a waltz. Here Oldfield guests on electric guitar. The booming drums give a grand scope to this piece that also includes in the mix glockenspiel and snare drums. This theme is subtly picked up in the track that follows, "Memories of Culchulainn" (pronounced Coo-hullan).

"Aillen Mac Midna" is an odd track, though it doesn't seem out of place. The drums here sound reversed, as if their sound is being sucked to something (it's not production, its an effect). This is followed by "The Unseelie Court (Bad Faeries)" which is both dark (a deep bass line) and playful (guitar). Flute is, of course, present, trilling wildly in this rockier tune. These "bad" faeries are an active and mischievous bunch, and maybe just a little cruel. Just what is that screeching sound heard alongside what sounds like a jackhammer? Acidic guitar (think of Hendrix a bit), keens and groans in a flurry of notes that seem to bend in impossible directions. Bad faeries indeed! The suite ends with "The Woods of…," a restatement of the more peaceful, pastoral imagery we began with.

Those other tracks include the 60s pop of "Sad Sing," the sparse drum/percussion, guitar and voice, Jon Anderson-like, "Will You Be Mine In The Morning?", and the reggae "Superman," complete with a Jamaican inflection in the vocals. These all from Fine Old Tom (1975) In comparison to the more serious instrumental pieces, these others seem more novelty, especially the latter. "Sad Sing" is perhaps clever in its convoluted, yet understood, lyrical style, but in the end, it's the instrumental pieces that will bring listeners back. "The Soujourn To The Dun Of Culann the Smith" (House Of Ulster, 1999) is a very moody piece, that mood created by the slow march of pounding drums, a rhythm that becomes almost hypnotic. Over this, Field plays flute.

"The Courting Of Emer" (House Of Ulster) is an often wheezy, lumbering piece, that at times sounds a bit warped and wavery -- not at all pleasing, although it does start out as a nice, mellow flute-led piece. One imagines that the one courting Emer is rather odd looking beast and not the dashing and handsome hero of fairy (or faerie) tales.

"Cycle For Moving Dunes," (Ozymandias, 1996) which closes the compilation, is an open airy piece without being flighty. The warm sound of violin ground this piece, and yet also adds much to its lyricism. As in other pieces, the drums and percussion suggest movement, whether here at walking pace (though there is a sense at times, of a montage of traveling scenes – that is, time-lapse filming of these dunes changing over time, seeming to "move.") or at a marching pace elsewhere. In this piece, throaty, darkish keyboards add washes and texture as the pace quickens. Towards the end, the piece takes on an epic feel as we get organs becoming more prominent in the mix.

The liner notes indicate that one "might find another track" after "Cycle For Moving Dunes" and if so, "you own a rare special bonus-track" of "Sad Sing" in German. This edition does, in fact, include that piece (but how rare is rare, I don't know). It has a sparse voice, guitar and drums arrangement that makes it sound more like a drinking song – the group of voices singing together (and laughing and whooping it up – drunk, perhaps?) surely adds to this feeling. Actually, it made me think the Beatles goofing around in the studio. Of course, you'll also hear Newman (presumably) shouting out thanks to various folks.

Faerie Symphony and Other Stories is a very pleasant album to listen to and very well done. Some bits of "Fordin Seachrain" bother me personally, sounding a little warbly, but otherwise, it is very well dune. Bland at times perhaps for those looking for something a little punchier – you won't find reels as with, say, Tempest, for example. Even the more novelty tracks are okay, though they break up the mood set by the instrumentals. Ah, but that's what programmable CD players are for, no?

Get the original CD in one of these on-line stores:

Consíguelo / Get the original through:

Where to buy it: 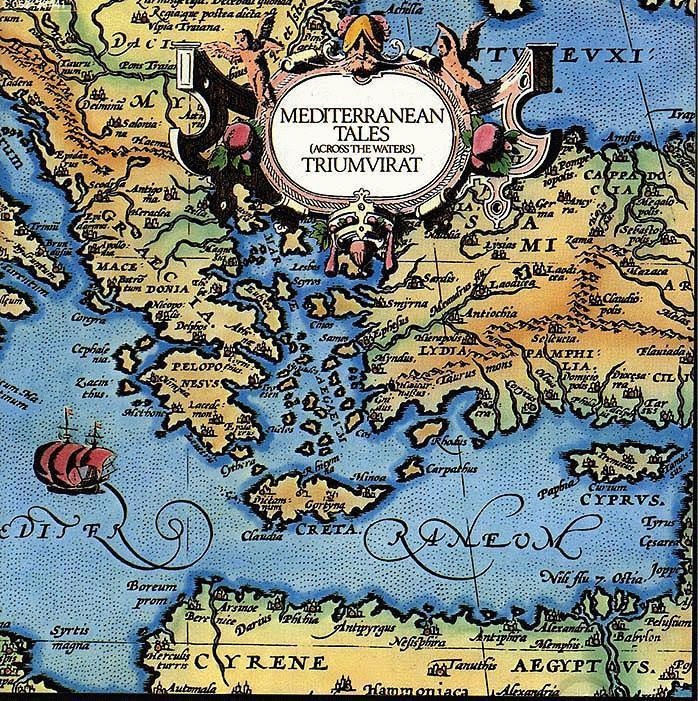 Triumvirat is one of the most talented progressive rock groups ever. Led by 'maestro' keyboard genius Jürgen Fritz, Triumvirat stunned even the most casual rock fan with its virtuoso performances featuring the legendary vocal work by both Barry Palmer and Helmut Köllen, and technically superior drumming by Hans Bathelt and Curt Cress.

A semi-trance, semi-ambient cosmic journey through Geir Jenssen's soundscapes. This was the first of Biosphere I've known and still is very dear for me. Great movie samples in English and Russian give me a "space-station" feeling in some moments. I have to say that this album is a bit uneven and I prefer the ambient "side", which later became Jenssen's speciality. Anyway, a great album to start your acquaintance with ambient in general and Biosphere in particular. And once you've fallen in love with that music, it stays with you...

Substrata by Biosphere is one of the all-time classic ambient albums, if not THE all-time classic album. Chilling atmospheric tones with ambient samples of ice, snow, forests, Twin Peaks-samples and Russian radio broadcasts… Substrata is difficult to describe in words alone. This is one album that every ambient fan needs to hear, if not own. For my own part the album is never far from my stereo. From the initial drone of an aircraft high overhead to the rambling monologues of later tracks every minute sends a chill down your spine.

Biosphere’s work is often described as “dark ambient” but to me this sounds to negative as every piece of music Geir Jenssen composed expresses so much different feelings and his albums are not simply a couple of “drones” thrown together. Neither is Substrata.

Substrata is inhabited by the vast spaces spreading across the artic region, endless nights and midnight sun, sub-zero temperatures and northern lights. This is a 60 minutes long masterpiece that takes you on the most unique trip you’ll ever have experienced.

Never a record had been so intimate with nature, so close to the sounds, colours and smells of its environment. Jenssen emphasises the intensity of these elements by bringing them into his beat-less compositions, allowing them to take control of this new organic world. From time to time, more urban sounds come into the spectrum, when voice samples – from Twin Peaks f.e.- telling abstract stories (remember the vision of Dale Cooper?), or a melancholic guitar offering support to an unlikely song emerge, but always, these components get swallowed in by the magma-like ambience. The listener becomes a helpless witness of the beauty and cruelty of this CD. Perhaps the most essential ambient album of all times…

Nancy Sinatra - These Boots Are Made For Walking

Side A: Sweet Dreams